The Arizona Legislature is not in session, but there is still a lot of work going on related to the Senate’s audit of how Maricopa County handled the 2020 General Election.

Those following the Cyber Ninjas-led audit can watch a livestreamed hearing at 10 a.m. Thursday from the Senate Building where a progress report will be provided.  Those participating in the briefing will be Senate President Karen Fann, Sen. Warren Petersen of the Senate Committee on Judiciary, Senate Audit Liaison Ken Bennett, Cyber Ninjas’ CEO Doug Logan, and sub-contractor CyFIR head Ben Cotton.

Earlier this week Senate President Karen Fann announced that audit activities revealed different counts than what was released by Maricopa County. She did not provide additional information at the time.

Also on Wednesday, a Congressional committee sent a letter on Wednesday to Logan demanding he and Cyber Ninjas produce of numerous documents and communication records. The letter was signed by Rep. Carolyn Maloney who chairs the House Committee on Oversight and Reform, and Rep. Jamie Raskin who chairs the House Subcommittee on Civil Rights & Civil Liberties; both of whom are Democrats.

“The Committee is seeking to determine whether the privately funded audit conducted by your company in Arizona protects the right to vote or is instead an effort to promote baseless conspiracy theories, undermine confidence in America’s elections, and reverse the result of a free and fair election for partisan gain,” the letter signed by Maloney and Raskin states.

The letter gives Logan and his company until July 28 to provide a number of documents to the Committee, including all communications between any Cyber Ninja representative and former President Donald Trump from Nov. 6, 2020 to present date.  It also sees production of “all documents and communications related to conducting the Maricopa County audit.”

The committee’s letter did not set well with one of Arizona’s congressional contingent. Rep. Andy Biggs R-CD5) called Maloney and Raskin’s action “yet another intimidation tactic” aimed at stopping the Arizona Senate’s audit.  “Chairs Maloney and Raskins need to get their swamp-soaked, power-hungry hands out of our audit and let the results speak for themselves,” Biggs wrote. 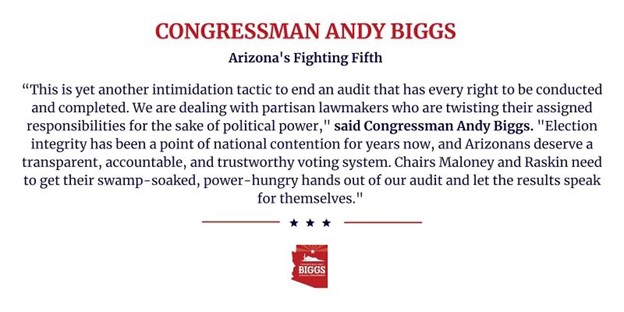 Wednesday also saw Stephen Richer, who took over as Maricopa County’s elected Recorder in January, refer to the Senate’s undertaking as “this whole insane endeavor.”

Richer made the comments in connection to a unanimous vote by the Maricopa County Board of Supervisors to take dozens of election tabulation machines out of service to the reported cost of $2.6 million. The county board will vote in coming weeks on what election system to use moving forward.

Woman Charged In Deadly Crash, 6 Killed On I-10