The Biden administration thinks they can stop global warming (aka climate change) by eliminating carbon dioxide emissions from burning fossil fuels and switching electrical generation to wind and solar installations. Biden says “follow the science.” If he did follow the science he would realize that there is no physical evidence that carbon dioxide plays a significant role in controlling global temperature (see posts at the end of this article).

According to Paul Driessen (senior policy analyst for the Committee For A Constructive Tomorrow), “ this would send the nation’s annual electricity requirement soaring from about 2.7 billion megawatt-hours (the fossil fuel portion of total U.S. electricity) to almost 7.5 billion MWh per year by 2050. Substantial additional generation would be required to constantly recharge backup batteries for windless, sunless days, to safeguard society against blackouts, cyberattacks and wholesale collapse. Generating all that electricity without new nuclear and hydroelectric plants would require tens of thousands of 850-foot-tall offshore wind turbines, hundreds of thousands (perhaps millions) of somewhat smaller onshore turbines, and billions of photovoltaic solar panels. All these turbines, panels, batteries and power lines would require tens of billions of tons of non-renewable iron, copper, aluminum, cobalt, lithium, rare earth elements, plastics, limestone and other materials. That would necessitate mining, crushing, processing, refining and transporting tens of billions of tons of ores – from thousands of mines and quarries, using gigantic gasoline and diesel equipment – followed by smelting and manufacturing, all with fossil fuels. None of this is clean, green or sustainable.”

So, how is “global warming” doing. We can consult with Dr. Roy Spencer who manages the Advanced Microwave Scanning Radiometer flying on NASA’s Aqua satellite. This satellite system measures global atmospheric temperature daily. The latest results are seen here: 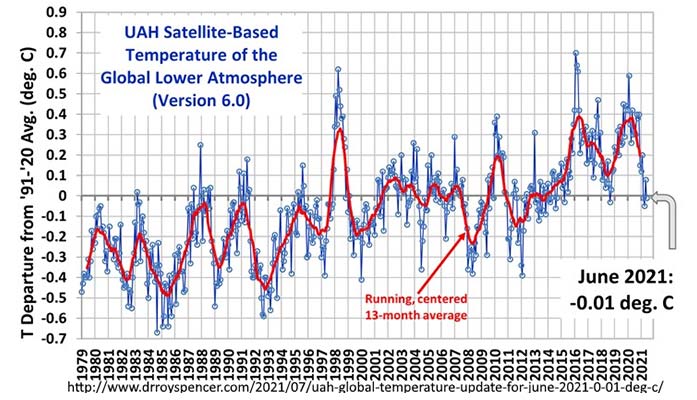 You should notice that global atmospheric temperatures in April, May, and June, 2021, were below the 1991-2020 average and similar to temperatures in 1983. According to the Global Monitoring Laboratory of NOAA at Mauna Loa, Hawaii, atmospheric carbon dioxide was about 340ppm in 1983 versus about 418ppm now. Although there has been deviation from the average due to things like the El Nino-La Nina cycles, there has not been any overall warming in spite of the increase in carbon dioxide.

Biden and other climate alarmists have swallowed the climate “Kool-Aid” and claim that reducing just one, small, insignificant factor will be the panacea in controlling global temperature, but it’s not that simple:

“In climate research and modeling, we should recognize that we are dealing with a coupled non-linear chaotic system, and therefore that the prediction of a specific future climate state is not possible.” — Final chapter,Third Assessment Report, IPCC 2000.

While controlling CO2 emissions from burning fossil fuels may have some beneficial effects on air quality, it will have no measurable effect on climate, but great detrimental effects on the economy and our standard of living. The greatest danger of climate change is that politicians think they can stop it. But the climate has always been in a state of flux. In my opinion, the debate over global warming is truly a scam designed to control (and tax) production and use of energy from fossil fuels.

(Note to younger readers: The term “Kool-Aid” used in this context refers to cult leader Jim Jones who, on November 18, 1978, instructed all members living in the Jonestown, Guyana compound to commit an act of “revolutionary suicide,” by drinking poisoned punch. Link )

For the real science, see these articles from my blog:

A Review of the state of Climate Science

Problems with wind and solar generation of electricity – a review

ATMOSPHERIC CO2: a boon for the biosphere

Carbon dioxide is necessary for life on Earth

Six Issues the Promoters of the Green New Deal Have Overlooked

Index with links to all my ADI articles: http://wp.me/P3SUNp-1pi

Visit my blog at: https://wryheat.wordpress.com/

A shorter ADI version is at https://arizonadailyindependent.com/2013/08/01/climate-change-in-perspective/

If you like murder mysteries, type the name Lonni Lees (my wife) into Amazon or Barnes & Noble sites to see her novels, a book of short stories, and reviews. For synopses and more reviews of her books see: https://wryheat.wordpress.com/lonnis-murder-mysteries/