WASHINGTON – Tucson officials said they will indefinitely suspend operations at one of the city’s water treatment plants to keep it from being overwhelmed by an underground toxic chemical plume.

City officials assured residents in a news conference Tuesday that water from the Tucson Airport Remediation Project treatment plant is safe, and that the decision to stop operations there is merely a precaution against high levels of the chemical PFAS that could be moving toward the plant.

PFAS, which is used in firefighting foam and other applications, was detected in the groundwater near several military bases and airports in the state, including the Arizona Air National Guard facility at the Tucson International Airport.

The chemical was first detected in TARP groundwater years ago, but levels were low enough then that they could be removed with available treatment, city officials said.

“Unfortunately, we have hit a critical moment where we can no longer confidently deliver safe drinking water from TARP due to elevated PFAS levels in the water entering the facility prior to treatment,” Tucson Mayor Regina Romero said.

The Environmental Protection Agency does not regulate the chemical, but has set a safe “health advisory level” of 70 parts per trillion. Tucson officials said they have maintained their own standard of less than 18 parts per trillion, which they said is among the strictest in the nation.

Groundwater near the airport is not part of the city’s water system, but when tests in 2019 showed levels there as high as 10,000 parts per trillion, it put city officials on alert. They said Tuesday that it’s time to shut down the TARP plant before there is any chance it will be tainted by the higher levels.

A Tucson Airport Authority spokesperson said the airport is dedicated to mitigating the environmental impact of PFAS, despite the fact that the federal government requires the use of firefighting foam containing PFAS.

“The TAA is committed to remaining a proactive community partner in addressing possible PFAS contamination while complying with all its federal requirements,” spokesperson Jessie Butler said.

Thomure said it could take “anywhere from years to decades” to resume operations at the TARP plant, which could cost “tens, if not hundreds, of millions of dollars.” That’s a bill that local officials insisted city residents will not have to pay.

“Tucson did not cause the pollution, but we are being left to deal with it. That is not fair,” Romero said.

While officials said discussions of who is responsible for the problem are “preliminary,” most criticism Tuesday was directed at the EPA and the Defense Department. Local, state and federal officials said they have not done enough to prevent, and address, the problem.

Fellow Tucson Democratic Rep. Raúl Grijalva said there is “no justification for communities like Tucson to continue suffering from PFAS contamination while the federal government drags their feet and fails to act.” 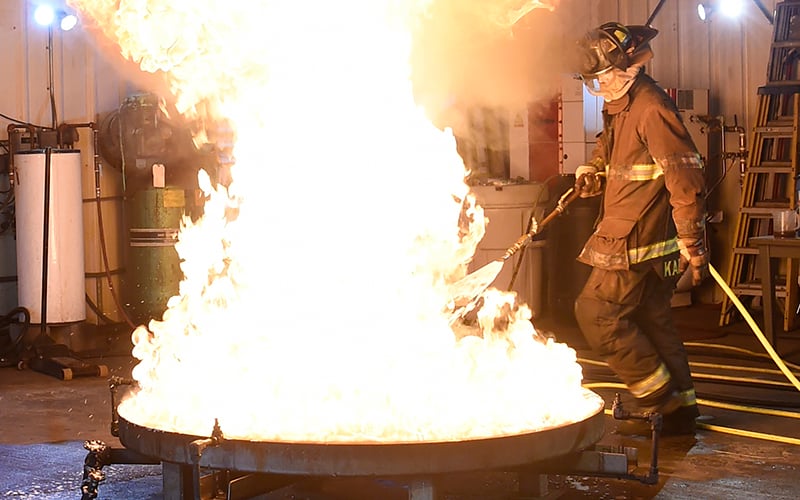 A technician at the Naval Research Laboratory in Chesapeake Beach, Md., tests the effectiveness of aqueous film-forming foam – a firefighting foam that often contains PFAS. The foam in used by the military and in airports to suppress fuel fires, but the chemical is hazardous. (Photo by David Vergun/Department of Defense)

“For too long, the Department of Defense has continued to shift responsibility and failed to address PFAS contamination on and near military bases to the detriment of our families, friends, and neighbors in Tucson,” he said in a prepared statement.

Arizona Department of Environmental Quality Director Misael Cabrera, who was on hand for Tuesday’s announcement, said it is “not reasonable” to ask Tucson Water to continue treating groundwater from the TARP site without increased support from the federal government.

“We now ask U.S. EPA, the National Guard Bureau and other responsible parties to engage and take action in order to resume operations at the TARP plant as soon as possible,” Cabrera said.

Joshua Alexander, press officer for the Environmental Protection Agency’s Pacific Southwest office, said the agency “has been working with Tucson Water since August 2020 to complete a study identifying alternative uses, other than drinking water, for the treated water.”

If TARP water were to be used for purposes other than drinking, the risk would be lower and the facility could potentially restart operations.

In the meantime, the city will replace TARP’s water with Colorado River water delivered by the Central Arizona Project, which currently provides the majority of the city’s drinking water.

“Our primary source of water now is water from the Colorado River that’s being brought into Tucson, recharged, and recovered. It (PFAS) has never been detected in that supply,” Thomure said.