WASHINGTON – The House Natural Resources Committee granted Chairman Raul Grijalva, D-Tucson, the authority Wednesday to subpoena administration officials, after committee Democrats said they were “left with no choice” in the face of bureaucrats’ resistance.

The party-line vote gives Grijalva the ability to issue subpoenas for records or testimony related to “mismanagement, waste, fraud, abuse and wrongful conduct,” an action that previously required a full committee vote.

Committee Republicans said the authority “invites abuse,” and they balked at the prospect of “subpoenas issued in the dark.”

But Grijalva said that power is needed to bring to heel an Interior Department that has failed to respond to all but a handful of committee requests for documents and testimony. He said the “stonewalling … has to end.”

He said the first subpoenas, for information the committee has been seeking for more than a year, could come within the next week.

But Interior Secretary David Bernhardt tweeted Wednesday that it is committee Democrats who need to be reined in.

“For over a year, the Department has accommodated requests from the House Natural Resources Committee, providing an unprecedented amount of documents,” Bernhardt’s tweet said. “As of this morning, the Department has produced 21,935 documents totaling 204,709 pages in 80 substantive responses to the Committee.

“Today’s action by the House Natural Resources Committee demonstrates they won’t let the facts stand in the way of their rhetoric. Going forward, the Department will take today’s action into account for every decision it makes to deal with this Committee,” he said, before adding, “Godspeed with the witch hunt.” 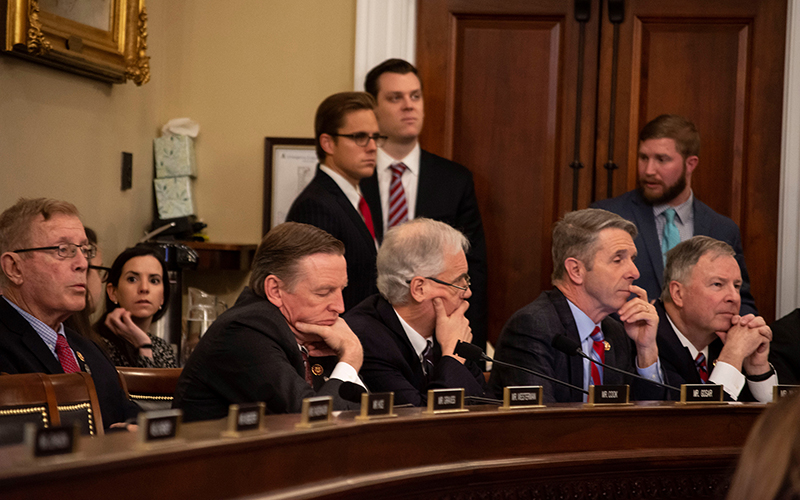 Republicans asked committee Democrats why the panel chairman needs the authority to issue subpoenas, instead of leaving that decision to the committee as has been done in the past. (Photo by Jessica Myers/Cronkite News)

It has asked Interior multiple times for a cost-benefit analysis and financial justification for the Bureau of Land Management’s move from Washington, D.C., to Colorado, but said it got no detailed answers in return.

In all, the committee said it has made 25 formal request for information but received just three complete or partly complete responses. Responses have included pages with “entirely blacked-out data, PDFs of wingdings and unreadable gibberish, and other nonresponsive material,” the committee said on its website.

When asked why approval was given despite environmental concerns for an Arizona housing project that could include up to 28,000 homes, the committee received redacted, unreadable documents.

Grijalva said there is a growing frustration of questions consistently going unanswered or ill-prepared witnesses who come forward without useful information from their agencies.

“After more than a year of stonewalling and smokescreens, I would be failing my responsibility as chair if I did not seek this authority,” Grijalva said Wednesday.

But Rep. Rob Bishop, R-Utah, the ranking Republican on the committee, said that many of the Democrats’ requests for information have been broad, directed to the wrong people or for information that was already publicly available.

Bishop said granting Grijalva the power to issue subpoenas will “wipe out input of minority members” – and questioned why it was needed since Democrats have a majority on the committee and could approve a subpoena whenever they want.

“When I was chairman I used the same rules we are attempting to change today and we used it significantly and successfully,” Bishop said. “The fact that we’re doing this change is unusual.” 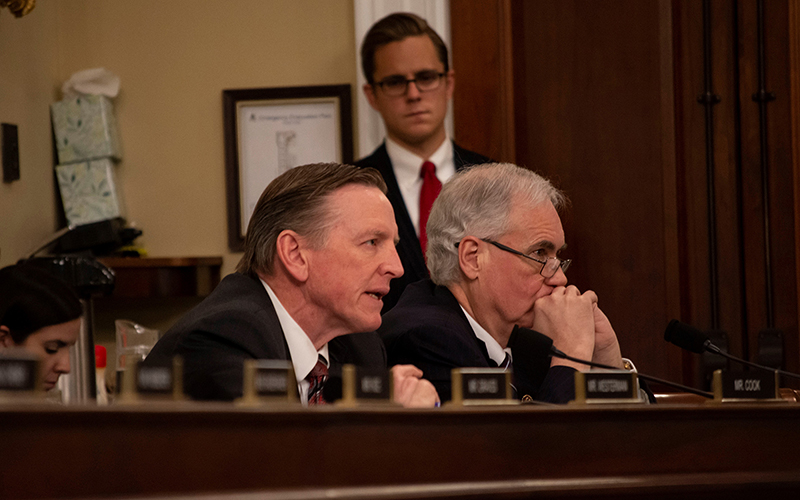 Rep. Paul Gosar, R-Prescott, amended the supboena resolution to let private individuals seek compensation from the government if they are subpoenaed, saying people should have the right “not to be bankrupt” by committee action. (Photo by Jessica Myers/Cronkite News)

The committee approved a Bishop amendment that requires the Democrats to notify the GOP members of any subpoenas.

It also unanimously approved an amendment from Rep. Paul Gosar, R-Prescott, that would let private citizens seek compensation if they are served a subpoena issued by the chairman. Those individuals could be “a rancher or farmers from California” or “miners in Arizona,” Gosar said.

“We should allow the people the right not to be bankrupt by this action,” he said.

Grijalva pushed back on Republican complaints that the action is unprecedented. He said Rep. Doc Hastings, R-Wash., was authorized to “subpoena, among other things, apparent conflicts of interest by current and former Department of Interior employees in connection with their responsibilities to the administration of public lands” when he was chairman from 2011-2014.

“That was a reaction to the imperial presidency of Barack Obama, to the fact that he was using executive power to deal with some issues on public lands and others,” Grijalva said.

Abuse of executive power is one reason Democrats are passionate about the subpoena power now, Grijalva said, with an administration that he said sees the House as “irrelevant and inconvenient.”

“They want to, in their own imperial style, do what they want without any checks, without any balances and without any oversight,” Grijalva said.

“This subpoena is not only important, it’s necessary because we are on a dangerous path. And the way to turn that path around is for us to affirm who we are, why people elected us and why this branch of government is a coequal branch,” he said.