LA JOLLA, Calif. – You may have heard of the Pineapple Express – not the 2008 buddy comedy about marijuana, hit men and corrupt cops – but the long, narrow “river in the sky” that brings tropical moisture from Hawaii to the West Coast.

Atmospheric rivers, which have been studied for nearly two decades, are flowing areas of water vapor in the upper atmosphere driven by areas of low pressure over an ocean. They are the source of most of the West Coast’s heaviest rains and floods.

Researchers recently created a scale, similar to the one used for hurricanes, to categorize the strength and potential impacts of atmospheric rivers. This system could help communities prepare and respond to floods, and aid water managers calculating how much water will be available in any given year.

The team of researchers led by Marty Ralph, director of the Center for Western Weather and Water Extremes, also known as CW3E, at the Scripps Institution of Oceanography, created the scale to describe a range of scenarios where atmospheric rivers could be either beneficial or hazardous.

“The scale recognizes that weak ARs (atmospheric rivers) are often mostly beneficial because they can enhance water supply and snow pack,” Ralph said in a Scripps press release. Stronger rivers, he said, “can become mostly hazardous; for example, if they strike an area with conditions that enhance vulnerability, such as burn scars or already wet conditions.”

Atmospheric rivers hit the West Coast every winter. Arizona felt severe impacts from an atmospheric river in January 2010, when more than 10 inches of precipitation fell in the higher terrain east of Phoenix. The National Weather Service estimated damages at $11 million across the state.

Most atmospheric rivers are weak, but they’re a key feature in the global water cycle, providing beneficial rain or snow that is crucial to the water supply, especially in the West, according to the National Oceanic and Atmospheric Administration.

Breakdown of an AR 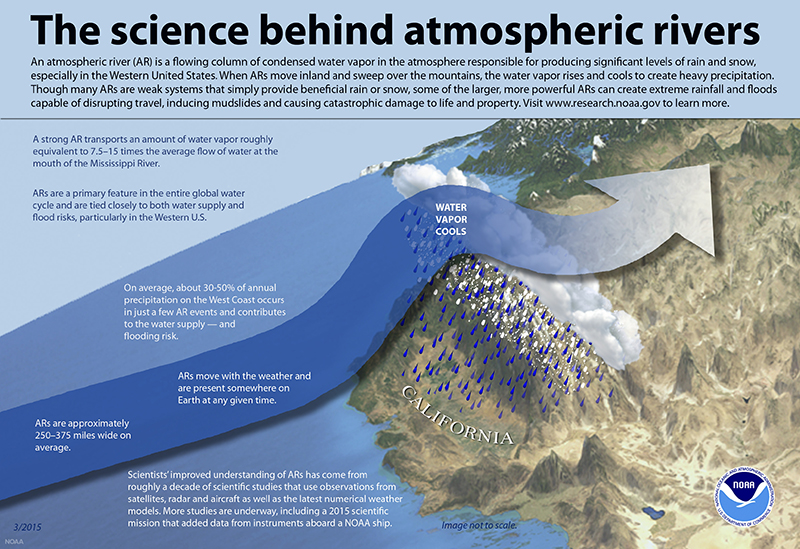 (Graphic courtesy of the National Oceanic and Atmospheric Administration)

The National Weather Service calls these long, narrow regions of flowing water vapor “rivers in the sky.” Winds in the upper atmosphere carry this water vapor toward land masses. Atmospheric rivers can release that water vapor in the form of rain or snow depending on the terrain.

The entire western coastline of the U.S. features mountains, with the peaks of the Sierra Nevada ranging between 11,000 and 14,000 feet. The mountains provide an upward forcing of the fast-moving water vapor, which, once lifted, quickly condensates and precipitates over the area.

Atmospheric rivers can produce great quantities of rain that cause flooding, but they also contribute to increases in snowpack crucial to water supplies. Roughly 80% of levee breaches in California’s Central Valley are associated with landfalling atmospheric rivers, according to Scripps.

How the new scale ranks ARs

The scale developed by Ralph and the weather service’s Jonathan Rutz, ranks atmospheric rivers from 1 to 5 based on the duration of water vapor transport over an area, which their research showed is what causes the greatest impacts.

An atmospheric river is given a category if water vapor lingers in an area for less than 24 hours, and it’s upgraded if it lingers for more than 48 hours. Unlike other storm scales, this one builds in time as a factor. The table below breaks down categories 1 through 5.

Economic loss is also considered in categorizing atmospheric rivers, based on previous events. For example, in a December 1996 event, California saw its largest flood damages since 1950, totaling $1 billion. This would have been categorized as an “exceptional” atmospheric river, according to Scripps.

A new study published this month in Science Advances by Scripps postdoctoral researcher Tom Corringham found that atmospheric rivers over the past 40 years have contributed to $42.6 billion in damages across the West – roughly $1.1 billion per year.

The study also suggests damages in Arizona are due to atmospheric rivers that make landfall in Baja California.

Determining the category of an AR

The researchers determine the category of an incoming atmospheric river with a variety of tools including real-time satellite data and work done on the ground and in the air.

The team will launch weather balloons along the coast as a storm is making landfall. Instruments called radiosondes are attached to these balloons, which record temperature, moisture, wind and pressure in the atmosphere. The data is sent back to the team in real-time to a computer. 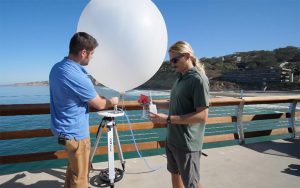 Before an atmospheric river makes landfall, the “Hurricane Hunters” of the U.S. Air Force Reserve will send stationed aircraft into the atmospheric rivers over the Pacific Ocean. The flights are launched on short notice based on evolving forecasts as rivers develop, according to a Scripps press release.

The flights serve the same purpose as launching weather balloons from the ground.
“Instead of launching a balloon from the ground up, the same device will fall from the plane, and we’ll collect data from the sky down,” said Chad Hecht, a CW3E staff research associate.

The researchers then use the data collected from the flights and balloons to see how much water vapor is being transported by the winds.

The use of aircraft to deploy sensors to improve hurricane predictions has been in place for decades. This project brings this approach to the West Coast by targeting atmospheric rivers to improve forecasts of heavy West Coast precipitation, the press release reported. 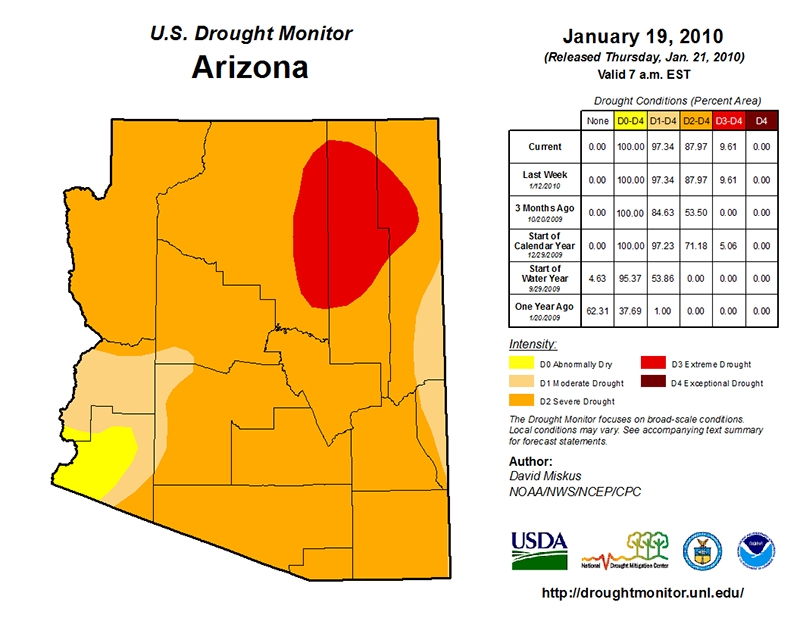 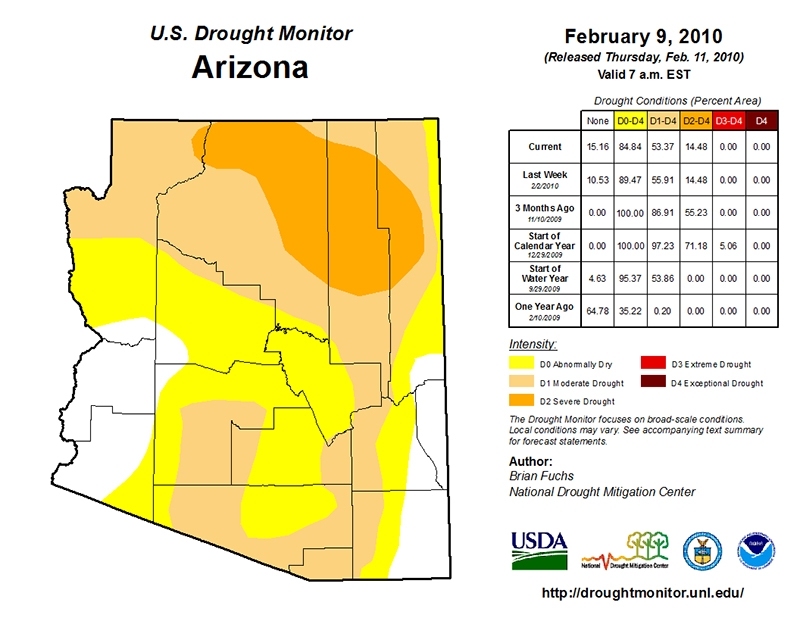 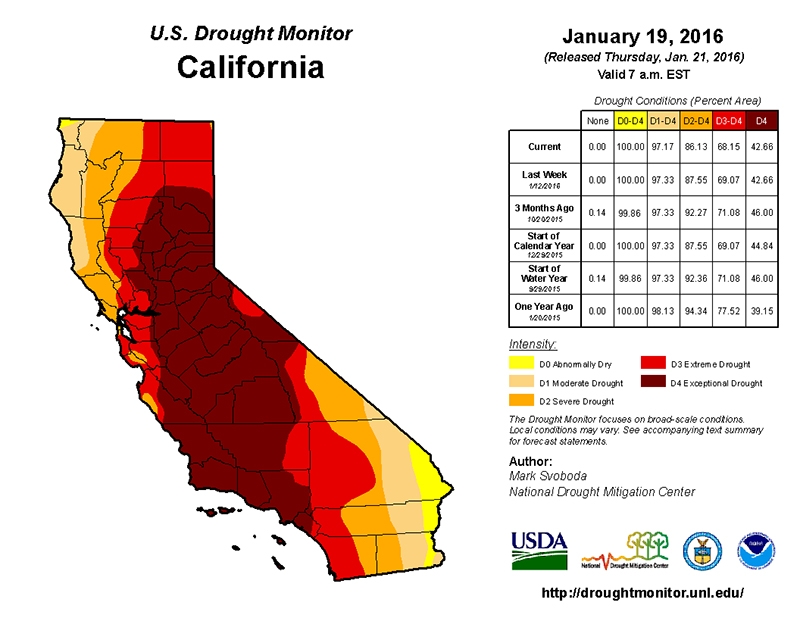 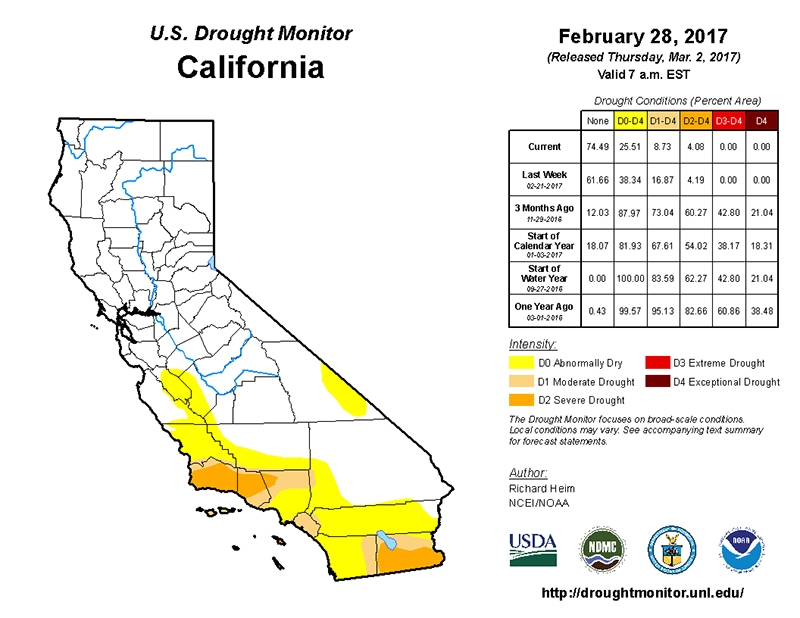 A 2013 study published in the American Meteorological Society referred to atmospheric rivers as drought-busters, noting: “Droughts end abruptly as a result of the arrival of an especially wet month or, more exactly, a few very large storms.”

The January 2010 storm in Arizona erased extreme drought from the state and reduced severe drought from 88% to 14% in metro Phoenix.

A more recent and extreme example took place in California during the 2016-17 winter season, which came after six years of historic drought that contributed to the loss of 102 million trees in state, according to the U.S. Forest Service.

That winter, a series of atmospheric rivers nearly erased drought from the entire state. In January 2016, exceptional drought covered 43% of the state, which is the highest category on the drought monitor. By February 2017, exceptional and extreme drought was erased, and severe drought was reduced from 86% to 4%.

From 1950 to 2010, the American Meteorological Society study said, 33% to 74% of droughts were broken by the arrival of landfalling atmospheric river storms.

A scale for planners, emergency managers

California, Arizona and other Western states rely on winter precipitation for their water supplies, and using the scale for water planning could happen as early as this winter season. Too much precipitation can be deemed hazardous for these states, leading to infrastructure damages from flooding.

“In terms of water planning,” said Michael Anderson, state climatologist with the California Department of Water Resources, “the scale gives us a situational awareness as we build our water year.”

The scale allows water planners to determine how much of the incoming rain will be of benefit or become a hazard.

“A long duration event may lead to significant inflows into our reservoirs, as well as significant influence on the uncontrolled tributaries for Central Valley rivers,” Anderson said. “This can lead to elevated river stages, which lets the weather service know to monitor the river for flood stage.”

During the 2016-17 winter, a series of atmospheric rivers led to the Oroville Dam rupture in February 2017, which prompted the evacuation of 180,000 people, the New York Times reported.

Emergency managers also could benefit from the new scale.

“Let’s say you’ve got the potential for a large atmospheric river to impact a burn area,” said Forest Cannon, a Scripps postdoctoral researcher. “That allows citywide emergency managers to dedicate resources that may help mitigate the impacts on that local area.”

Right now, the National Weather Service is not using the Scripps scale in its forecasts. Paul Iñiguez with the Phoenix office told Cronkite News the scale needs to undergo testing.

“What does that necessarily mean if you are going to be impacted by these different categories of atmospheric rivers?” he asked. “What are the impacts or associated outcomes?”

The Center for Western Weather and Water Extremes provides current information on incoming atmospheric rivers, including the category, on its website.